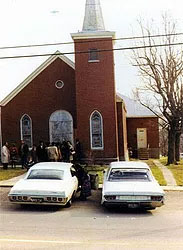 Important Moments in First Baptist History
1833 to the present“For with God nothing shall be impossible.”
Luke 1:37
The first church of Black Baptist in Louisville, Kentucky was organized in 1829. Worship began on a lot at Fifth and York Streets. Several groups left this site and established churches in the city and elsewhere — such was the case in Jeffersontown. First Baptist Church in Jeffersontown was organized in April 1833 by Rev. Summerfield. Through the leadership of Isaac Lacky, Harrison Taylor, Lou Enders and George Lewis, a plot of ground was purchased from John Tucker at the cost of $175. The first church was located on the site of the present structure, but was burned to the ground allegedly by the Ku Klux Klan. During the period of 176 years, the church has had only twelve (12) ministers to serve as pastor: Rev. Summerfield, Rev. Elias Anderson, Rev. James Enders, Rev. Phillip Alexander, Reverend James Wilson, Rev. Richard Reynolds, Rev. J.H. Lewis, Rev. Arvil Carroll, Rev. Melvin Morrow (Interim), Rev. William Richardson, Rev. Thurmond Coleman, Sr. and Rev. Kevin L. Nelson, Sr., called in 2002.
In 1907, Sister Luthia Smith organized the Ladies Sewing Club to help care for the sick and needy in the community. In addition to its service to the community, the Club worked with the pastor and deacons in the physical care of the church. Today, the group is known as the Ladies Sewing Circle Ministry and continues its ministry to the community through benevolence, visitations and mobilizations to provide support to those most in need. In April 1960, the groundbreaking ceremonies for the foundation of our new brick church took place during the 127th Anniversary Celebration. In October 1970, groundbreaking ceremonies were held for the new Education Building, which was dedicated in June 1971. As our church began to grow, so did the need for a new building. The last service in the old building was held in May 1976. Services were held in the Garland Cochrane Elementary School until a new church was built. On Sunday, February 20, 1977, we had our Entry and Dedication Service and thus, began our annual celebration of the “Day of Thanksgiving.” In 1980, a second floor was added to the Education Building completing the third phase of building. In 1983, First Baptist celebrated its 150th Church Anniversary. April 22, 1990 will always be remembered as a milelstone in the history of First Baptist. On this day, we celebrated our 157th Church Anniversary, which included the Dedication of our Family Life Center. Rev. John O. Crittenden, Jr. was hired as Director of the Family Life Center. The Grand Opening was held on Saturday, September 22, 1990. It was later renamed the Rev. Thurmond Coleman Sr. Family Life Center.
Due to the excellent leadership of all of our pastors and our dedicated members who have worked so hard over the many years, First Baptist has grown from a few members in 1833 to over 1,500 members today. It now hosts a campus that is made up of several buildings and properties including the historic former Jeffersontown Colored School. First Baptist offers a number of ministries that reach out throughout the community and around the world. Currently, First Baptist is in the genesis of developing and building a state-of-the-art sanctuary and Community Fellowship Center. Research is being done to assess the exact needs and models have been developed to give the membership ideas of what is possible. We give God all the honor and glory for the success that First Baptist Church has experienced since our humble beginnings in 1833. We believe as long as we keep God first, our future will be equally as rewarding and productive as our past.
WE HAVE TRULY BEEN BLESSED!

Welcome to FBCJ! We are delighted you decided to visit our church and ministry. At The First Baptist Church Jeffersontown, it is important to us that you have everything you need to know, as a first time visitor.
Learn More